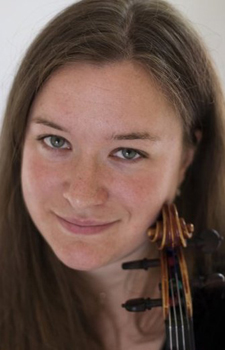 AMANDA LAKE graduated from the Royal College of Music with a First in 2007, where she was a scholarship student of Dona Lee Croft. She has since studied with Levon Chilingirian and Bela Katona. Amanda has appeared extensively as a soloist with orchestras across the country, performing works by Bach, Mozart, Tchaikovsky, Ravel, Sibelius, Prokofiev and Berg. In 2010-11 she led the Amadeus Orchestra on tour to China, appearing as soloist in Vaughan Williams’ The Lark Ascending. As a former member of the Alea Quartet, she performed at the Purcell Room and at St Martin’s-in-the-Fields as part of the Park Lane Group’s Young Artist series. She performed at the 2011 Aldeburgh Festival as part of the Lake/Maryon Davies Duo. Amanda has undertaken freelance work with orchestras including the London Philharmonic Orchestra, Philharmonia, Birmingham Contemporary Music Group, City of London Sinfonia and the Gulbenkian Orchestra, Lisbon. She currently combines a busy schedule as a chamber musician and soloist with her position as a tutti first violinist with the City of Birmingham Symphony Orchestra, recently guest leading the orchestra in performance alongside tenor Mark Padmore. In her spare time, Amanda also enjoys sailing and swimming in the North Sea.